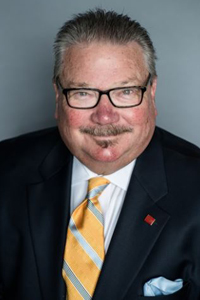 Bob has been involved in commercial and industrial brokerage since 1992. He earned the CCIM Designation in 1995 from the CCIM Institute and the SIOR Designation in 2015. He is also a licensed General Contractor in the State of North Carolina. After seventeen years in the electric utility industry, Bob began his real estate career in 1992 with Coldwell Banker Alamance Realty. He became the first full time commercial broker on staff and in the fall of 1993 was named Manager of the Commercial Division. He held that position until August of 1996 when he formed Robert M. Lewis & Associates, Inc., a full service commercial brokerage firm. Bob operated the firm until April 2004 when he affiliated with NAI Piedmont Triad Commercial Properties. He now heads the Burlington office as Broker in Charge. The staff is comprised of three brokers complimented by corporate office located in Greensboro, North Carolina. Bob has extensive experience in industrial sales and leasing, residential land development, retail site selection and investment properties of all types. His clients have included The Home Depot, Walgreens, Badcock Furniture, Loomcraft Textiles, Bank of America and Lincoln Financial.